Even At $1/Share, CannTrust Is Still A Bad Bet

One of the most pernicious investing myths, particularly among newer investors, is that a low share price means that a stock is more likely to be a real bargain. Even people that understand the idea of market caps sometimes think that a low-priced stock has better risk/reward than a more expensive one. The marijuana space offers a great example of this in action right now.

You have Canadian cannabis producer CannTrust (CTST), which has fallen from $10 to $1 this year. That’s a 90% decline. On the other hand, some big-name marijuana stocks like Tilray (TLRY) are also down 90% from their peaks, and even the leaders like Canopy (CGC) and Aurora (ACB) are down 70%. Yet Canopy and Tilray are still quoted in the double-digits, so they are priced like normal stocks, and traders perceive them as such. 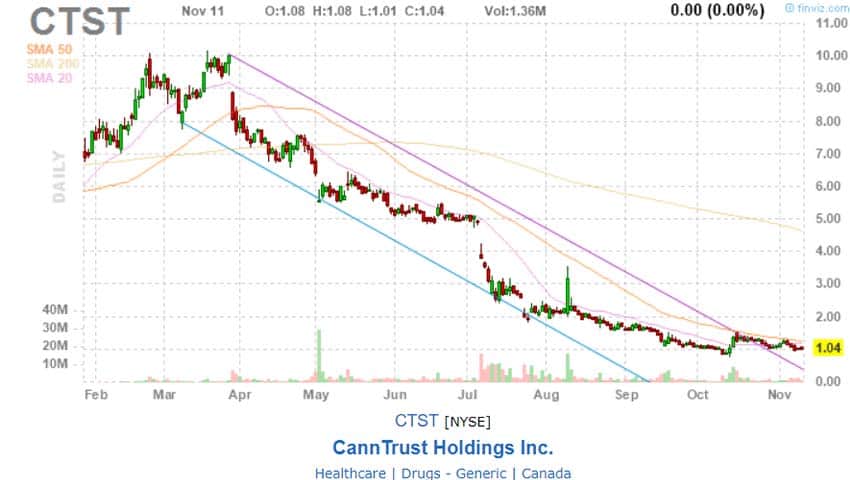 Meanwhile CannTrust is selling for just $1.04 per share as of this writing for its U.S. listing, bringing out the supposed bargain hunters. At just a buck, and after such a huge fall, CTST stock must have a big rebound coming up, right? Not necessarily.

If you go to CannTrust’s website right now, this helpful box pops up on your screen: 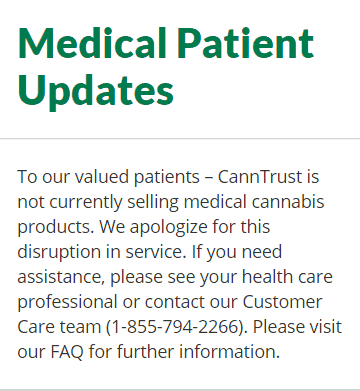 This should give you a sign that something is amiss, and a clue as to why CTST stock has managed to perform even worse than its other marijuana peers? What happened? CannTrust had its Health Canada license suspended after a scandal. And as far as scandals, this one takes the cake.

This summer, we learned that CannTrust had severely flaunted regulators. The company used five unlicensed growing rooms to produce marijuana prior to receiving an operating license from the Canadian government; it also admitted that “inaccurate information [was] provided to the regulator by CannTrust employees”. In August, the company’s auditor, KMPG, said that the company’s previous financial reports could no longer be relied upon, leading to another sell-off in the stock. Days later, Health Canada dropped the hammer on CannTrust, finding indiscretions including:

the conversion of five rooms from operations to storage without regulatory approval, the construction of two new storage areas without regulatory approval, insufficient security controls, inadequate quality assurance investigations and controls, non-compliant standard operating procedures and the failure to retain certain documents and information that Health Canada needed to complete the audit in a timely manner.

Let’s just say that CannTrust didn’t lose its operating license for minor technicalities. The company followed this up by firing 20% of its employees to save money, sacking CEO Peter Aceto, and demanding that Chairman Eric Paul resign.

The company is also late in filing its financials due to all the drama. Regardless, it created a Special Committee to investigate what happened and plan a path forward. On October 24th, this Committee issued its findings. In doing so, it announced that it has given a remediation plan to Health Canada and hopes to complete that process by the end of the first quarter of 2020. It intends to file restated financials for previous periods by the end of this year. And it is laying off more staff to save money.

There’s reason to remain skeptical of how well this remediation plan is going, however. Just recently, for example, on October 27th, John Kaden, who is the Chief Investor Officer of Navy Capital, resigned from the CannTrust board. Perhaps Kaden was merely staying on until the Special Committee finished its investigation; still, for a company that is already down two of its former executives, this is not the best time to be having additional board members step aside.

Even If You Forget About The Scandal, CannTrust Is Still A Struggling Business

Like with bitcoin and blockchain stocks at the end of 2017, marijuana shares are quickly turning into another teaching moment for newer investors and folks that speculate on hot sectors. Once the hype is gone, prices can keep dropping and dropping… and then drop some more. When you have assets with dubious value, such as alternative cryptocoins, blockchain technologies or a commodity product business like marijuana farming selling at obscene multiples, bad things tend to happen.

If you invested in the most credible marijuana companies, the big name players like Canopy and Cronos (CRON) with top-tier outside investors, you still lost a large portion of your money. And if you had the misfortune of taking a flyer on a more speculative operation like CannTrust, you could have ended up losing nearly all your money.

And even at this point, it’s hard to see much ongoing value. If you were selling a marijuana company with a suspended operating license, a management team that faced numerous resignations in the face of scandal, and large operating losses even when the company was still functioning properly, what would you pay for it? Given that it last produced $40 million in trailing annual revenues while running with negative operative margins and negative adjusted EBITDA, the business was hardly a great one. And that was when the market was less oversupplied. Yet the market is still willing to pay several times sales for the business, even with its operations suspended.

By the time CannTrust might be able to get proper licenses again, bring back all its employees and get back to selling retail product – if that happens at all – it will face a far more competitive landscape. And it wasn’t even profitable before. The company might try to sell off its assets, but what would those be worth in this sort of market with marijuana so terribly oversupplied already?

The one positive is that CannTrust managed to raise $170 million earlier this year, though much of that appears to have been committed to CAPEX plans. With a lack of financial statements, it’s hard to say how much of the cash pile remains. If there’s one thing that underpins any meaningful value in CTST stock, it would be a significant amount of leftover cash from the equity raise.

Regardless, the current market cap – $150 million – is still too high. Even at just a buck per share, CTST stock has plenty more downside ahead of it. Unless the company tries to liquidate, it’s likely to burn through much of its residual value as it attempts to get operations going again. Given how badly even the best-managed marijuana companies are doing right now, there’s no need to speculate on scandal-plagued CannTrust.

Rating: Rotten – Get Rid Of This One Now

Company Watch: Office Depot May Just Be The First In This Category To Go

Does Core Laboratories (NYSE:CLB) Have A Healthy Balance Sheet?